Prague, Czech Republic, September 2, 2021 – Avast (LSE:AVST), a global leader in digital security and privacy, has found that while nine out of ten people say the internet is important to their life, online confidence decreases with age. This lack of confidence leads to less time spent online, causing missed opportunities for digital citizens to explore the internet fully. This research forms part of a comprehensive global study with YouGov and Forsa into global digital citizenship trends. 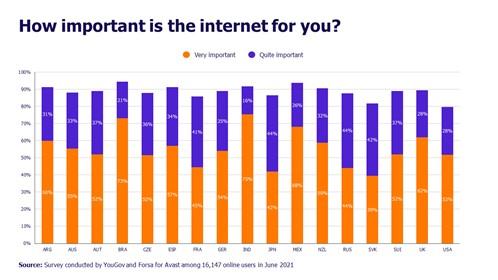 Online Confidence Decreasing with Age
Outside of work-related tasks, the research found that those aged between 18-24 years old spend the most time online, with 57% spending more than three hours a day on the internet; in direct comparison to just 19% of 55-64-year-olds and 22% of those aged over 65. The findings point towards a direct correlation between this time spent online and online confidence. In the UK, 80% of people rate themselves as confident online compared to the global average of  70% – however, this confidence decreases with each age group and drops to just 69% of those aged over 65. 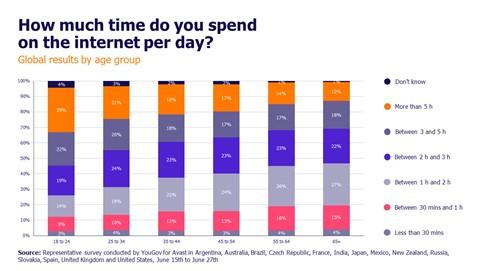 The research found it is the relatively simple tasks that people are struggling with the most. The top three issues that people identified were: backing up files (59%), dealing with problems and pop-up windows on their computer (46%); and setting, remembering and recovering passwords (43%). 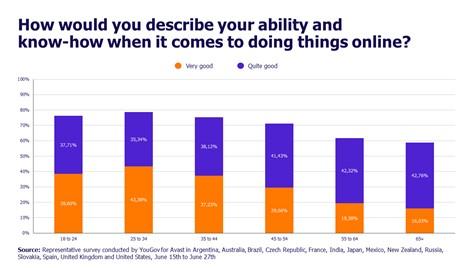 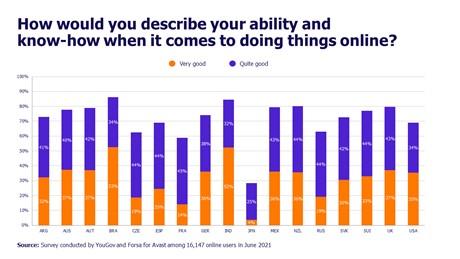 “It is positive to see such high levels of online confidence reported,” said Jaya Baloo, Chief Information Security Officer at Avast. “However, we cannot ignore the differences we see in this confidence and we need to keep older demographics in mind when it comes to digital education. We, as an industry, need to be enablers for potentially vulnerable digital citizens, and sharing online knowledge needs to be a part of family conversations. The younger generations specifically have been playing an essential role in helping their parents and grandparents navigate the online world, which we see confirmed by our survey.”

The majority of those who do not feel confident online say that this bothers them (62%), with (42%) admitting to feeling like a burden if they have to ask others for help - this figure rises to 69% across the globe. However, these concerns could well be misplaced. The most common feelings expressed by those who helped people online were positive sentiments of feeling helpful (64%), valued and appreciated (39%) and fulfilled (20%).

Inter-generational Help on the Rise
A quarter of the older generation (25% of 55+ and 27% of 65+) admit that they would like online help from younger family members, and the study found that it is indeed the younger generation most called upon to offer this support. 53% of people who have helped others with the internet, helped their parents, compared to just 10% (global 25%) who have had to help their children.

This inter-generational help correlates with concerns from people about their older relatives, with 29% of people whose parents use the internet expressing worry about them online, rising to 44% who expressed concern for their grandparents.

Looking specifically at online concerns, identity theft comes out on top as the number one worry for all age groups (36%). This is closely followed by password theft (30%) and virus infection (26%). Interestingly, these concerns differ when people are asked about the risks facing their older relatives. For example, 49% of people are worried their grandparents could fall victim to a fake website (global 28%), with 42% worried that they could be fooled by a fraudulent email (global 22%)[1].

These online concerns are holding many people back from doing things online – such as online banking or engaging on social media. 66% of people have decided not to do something online due to security and privacy concerns – this level is higher among women (68% vs. 63% of men), and highest among people over 65 (69%) (global: highest among 18-24 year-olds, 68%). The top things that these fears prevented people from doing are as follows:

Overall 15% of people felt that they don’t have good enough knowledge about how to protect themselves online, with this figure rising to 27% globally. This percentage is highest among the youngest and oldest generations; 16% of 18-24-year-olds, 18% of 55-64-year-olds and 17% of 65+.

*Avast has done a survey among 16,147 online users in 17 countries around the world. Avast commissioned the survey to the research institution YouGov who ran the survey from June 15th to June 27th in Argentina, Australia, Brazil, Czech Republic, France, India, Japan, Mexico, New Zealand, Russia, Slovakia, Spain, United Kingdom and the United States, and to the research institution Forsa in Austria, Germany and Switzerland. The survey was run as a representative survey among over 1,000 people in each region, apart from Austria and Switzerland where Forsa surveyed over 500 people each. The global data points in this report are covering results of all regions, apart from German-speaking markets. Results have been weighted to be nationally representative of each country.

National
SCAMMERS BEWARE: Get Safe Online and Cifas launch new Check-a-Website capability
Get Safe Online has partnered with Cifas, the UK’s
National
Should you ‘Accept all cookies’? Ask Prue…
Renowned celebrity baker, Prue Leith, has teamed
National
BRITISH HOUSHOLDS WORRY ABOUT BURGLARY MORE THAN ANY OTHER CRIME
New research shows two thirds (67%) of people are
All news
Be part of Neighbourhood Watch